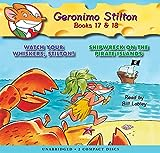 Also in this Series

General Note
Compact discs.
General Note
Originally published in Italian by Edizioni Piemme S.p.A., Casale Monferrato, Italy, in 2001 and 2003. Translated into English by Edizioni Piemme S.p.A in 2005.
Creation/Production Credits
Directed and produced by Paul Ruben ; executive producer, Cheryl Smith.
Participants/Performers
Read by Bill Lobley.
Description
Watch your whiskers, Stilton: A mysterious one-eyed rat is trying to steal The Rodent's Gazette from under my nose! My manager came up with a plan to stop him. He arranged for me to appear on a TV quiz show. But if I lose I have to give up my tail!
Description
Shipwreck on the Pirate Islands: My sister, Thea, comes up with a new way to torment me. She's combined my two least favorite things: travel and ghosts! She heard rumors of a haunted pirate treasure buried on an island and she dragged me into her treasure hunt!
Target Audience
Ages 7-10.

Note! Citations contain only title, author, edition, publisher, and year published. Citations should be used as a guideline and should be double checked for accuracy. Citation formats are based on standards as of August 2021.